Skip to content
Posted on December 2, 2022 by Allen He

In the golden spaceship of Lusail, the football city with its Kolkata puja replica of Champs Elysse and Beverly Hills (only in a grander scale), the Amazon warriors of Brazil ditched their gold and came in blue and nine new troopers as nothing much was there to be gained.

Only defender Eder Militao and midfielder Fred survived the Switzerland game as Dani Alves at 39 became the oldest Brazilian player in a World match. But the Doha locals (read mostly Indians) were not ready to miss the chance to do the Samba dance on a Friday holiday. They outnumbered the Brazilian supporters from Brazil by a mile and the gasps from the stands when every chance went abegging were not in Portuguese but the familial subcontinental roll of the tongue.

Brazil could have scored five, Gabriel Martinelli six but in Devis Epassy they found a foe who was not ready to be breached. And finally, those missed goals mattered the most as skipper Vincent Aboubakar ran like a bull clattering the expensively assembled second-string Brazilian China Shop to score with a header and give this World Cup another story to remember. The emotion got the better of him and his shirt was off and the yellow card was out and then the red as he was booked once before. The referee, too, acknowledged the euphoria a win over Brazil could bring and patted his back and exchanged a handshake before sheepishly giving the marching orders. 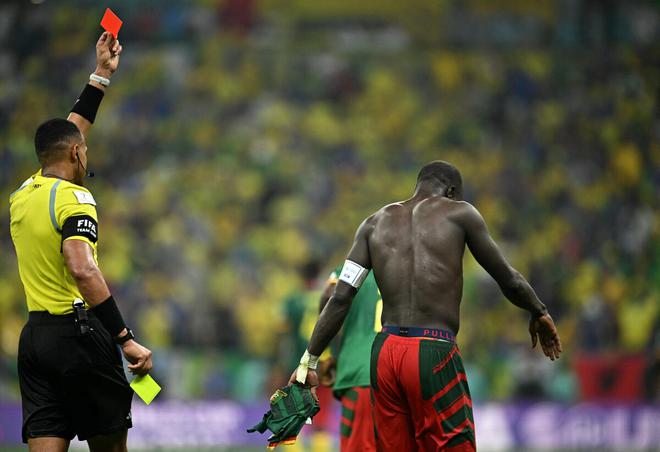 The referee brandished a red card to Aboubakar after his goal.
| Photo Credit: REUTERS

The Indomitable Lions were swelling in pride, Brazil was not perturbed as Neymar winked and joked while his teammates acknowledged the fans who had earlier unfurled a “Get Well Soon, Pele” banner.

The other game was more dramatic, and Switzerland won 3-2 that ill-tempered brawl with the Serbians and the result here didn’t matter. But tell that to the crowd that came to see Brazil win but refused to leave after the defeat, just happy to see their happy heroes a little longer.

Martinelli was the brightest among the Brazilians’ auditioning, his eagerness only matched by Epassy who stood like a rock. It was for long just a game between the two, Martinelli trying various methods to open a door to goal and the Cameroonian keeping nothing ajar in this long corridor of one chance after another. The windows too were bolted shut and not even a speck of light could sneak in past the vigil he was keeping. A ‘Get Well Soon, Pele’ banner was unfurled by the Brazilian fans.
| Photo Credit: AYON SENGUPTA

The Brazilians were still going through and against South Korea their heavyweights where to be back and there was nothing to worry for Tite and his son and the other assembly of assistants that he so fondly puts in the forefront.

For now, the moment was for the fans to click a few last-gasp pics for the hurried forwards back home. They were here and the result didn’t matter.