Skip to content
Posted on December 5, 2022 by Allen He

Harry Kane had to wait his turn. The England skipper put England ahead 2-0 against Senegal at the stroke of half-time. He had seen seven other teammates put the ball in the net so far in the World Cup. And the leading man, sporting the No. 9 shirt, finally had his goal, breaking into celebration.

Expectations are high when you are the designated striker in the side. But they are higher when you are also the holder of the golden boot from the last World Cup, you have the most tournament goals for England, you are one away from matching Wayne Rooney’s all-time England goal tally, and you are on track to break Alan Shearer’s record for most Premier League goals. Despite his teammates firing in nine goals, England manager Gareth Southgate has had to repeatedly field questions on when Kane will find his shooting boots after his no-goal show in the group stages.

Kane instead set up three of them.

Kane was asked the same question before the Senegal game. “I would love to be sitting here with two or three goals now, for sure, but I think the group stage has gone well.”

The Tottenham Hotspur striker has evolved his game in recent years. While there is no doubt in the quality he possesses in his feet, the burst of the explosion he had in his early and mid-20s is now evidently on the wane. When he dribbles with the ball, you almost feel he is awkwardly stumbling over before the defender(s) catches up with him. Goals like the one away in Southampton in 2015, when he beat three defenders before scoring, aren’t part of his catalogue anymore. It is unusual to see an elite forward at 29, a trend that started a little over two years ago, losing that dynamic quality in his game. Repeated injuries to his ankle – six instances – over the years explain the struggles to an extent.

Southgate: England ready for biggest test against France in quarterfinals

But here he is – Kane has created a role of a ‘free striker’ and is operating across and between the lines. An outlier of sorts among the modern-day strikers. It’s a bit like what Lionel Messi does – only with the economy of touches and without the thrill and force of nature about his game. Now, Kane drops deeper, vacating his designated position on the team sheet in search of the ball across the lines. It’s not easy to go man to man for an opposition when a striker does that.

His movement naturally attracts a defender out of his position, allowing Kane’s teammates to occupy that pocket of space. Kane’s game is most dangerous now once an opposite number allows him to collect the ball, turn and play in a runner to feet or behind the lines. At Tottenham, Heung-min Son and Dejan Kulusevski’s pace is used to devastating effect on counter-attacks. Kane has recorded 17 and 10 assists in the last two seasons at Spurs. He had a combined 26 assists in the previous six seasons.

In the win over Senegal, Phil Foden (aged 22), Jude Bellingham (19) and Bukayo Saka (21) were the benefactors of Kane’s movement and passing. For England’s first goal, Foden’s touch helped take Senegal’s right-back out of the game. Kane had similarly drawn the right centre-back with him down the left channel, where he collected the ball, turned and released a rampaging Bellingham to pull back for midfielder Jordan Henderson to slot it in. When the ball hit the back of the net, Kane was nearly 45 yards away from goal, casually jogging towards the box. 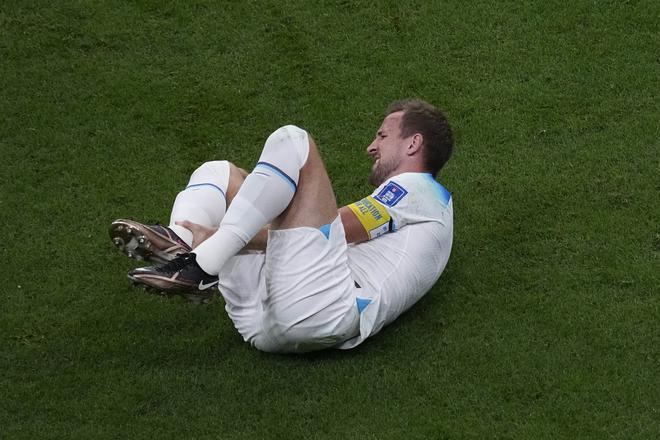 A shift in Kane’s game still doesn’t come at the cost of his goal-scoring prowess. He scored 33 and 27 goals in the last two years in an otherwise sub-par Spurs side. He has 12 goals in 15 matches for the North London side this season. He still makes the runs to get on the end of cutbacks and through balls. In the win over Senegal, he had three touches inside the opposition box. He scored from one and nearly scored from another one before that. In the group stages, he had just six touches inside the box. To put it in perspective, Poland’s no. 9 Robert Lewandowski had 23 touches in the opposition penalty area in four matches.

In the 2018 World Cup, Kane scored five goals in the group stages before converting just one penalty in the Round of 16 as his form dipped in a fourth-place finish. Kane is mindful of not repeating a similar trend and is keen on conserving his energy for the crucial stages of big tournaments. In the Euros last year, his first goal came in the Round of 16 before he scored three more in England’s run to the final.

“I was conscious before the Euros of trying to make it the other way. Of course, I still wanted to start well, but I was trying to make sure that physically and mentally, I was in the best place for the knockout stages,” he said before the Senegal win.

With one goal in the bag and world champion France up next, England and Kane will be keen to bring out the ‘goal-scorer’ to the forefront again.

Get all the results for the FIFA World Cup 2022 here: Full list of all matches, scores, results, goalscorers

Check out Sportstar’s coverage of World Cup in Qatar

Scan the World Cup in pictures

Football fans, put your skills to the test with FIFA World Cup Quiz

Soak in the rich history of the football World Cup

WATCH: What’s happening in Qatar and who is saying what

Here are some of the most frequently asked questions